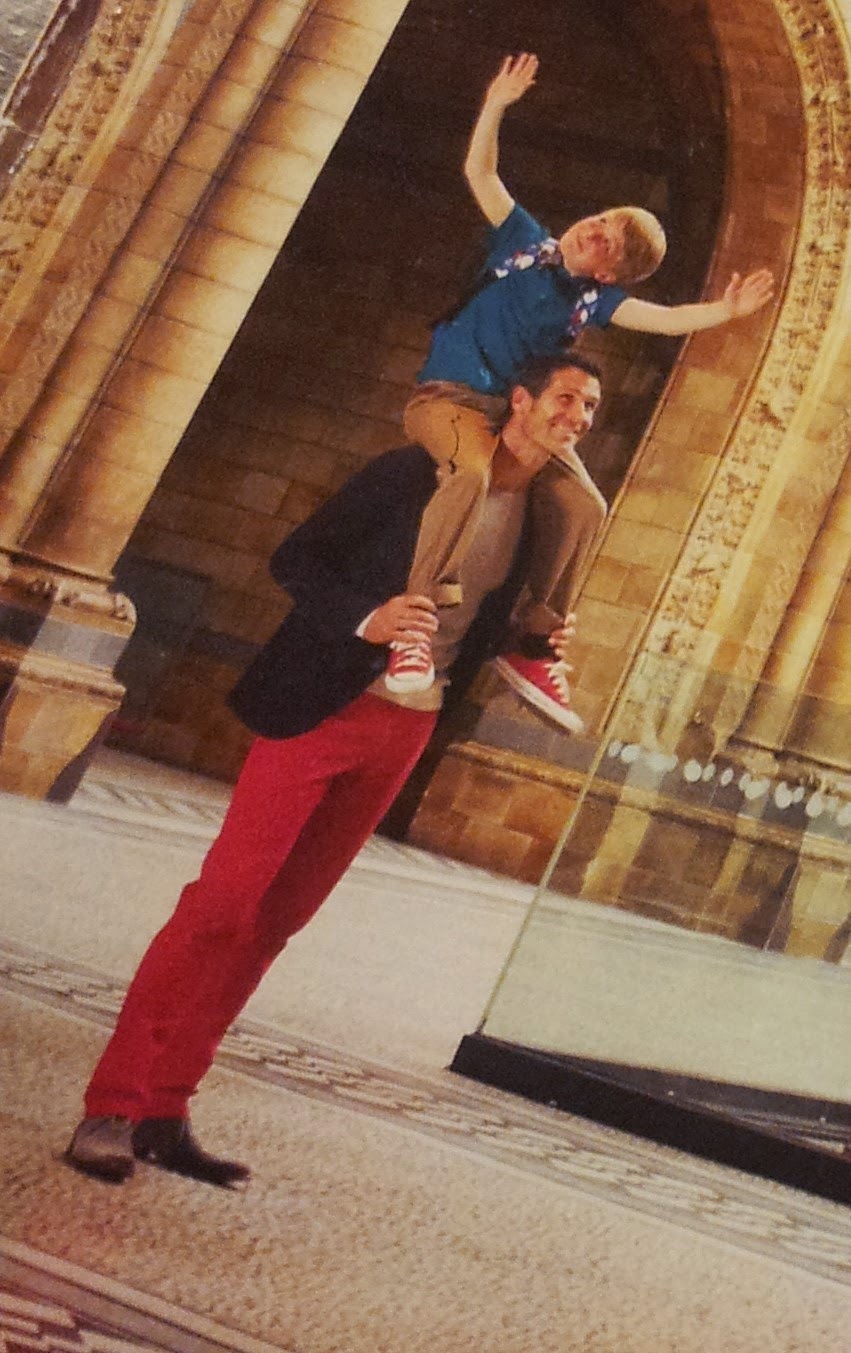 I’ll give you three reasons why.
1. They have this check-in person named Janet who doesn’t care if every single one of the ten duffel bags and beaten cardboard boxes you throw at her goes overweight. “That’s what these are for,” she says as she sticks another bright orange HEAVY tag on another HEAVY box.
2. On overseas Air Canada flights the beer is free – and that includes the Molson, not just the crappy American beer in the stupid uber-patriotic cans.
3. Air Canada’s in-flight magazine is pure and genuine entertainment; unintentionally purely and genuinely entertaining. Like young children. The New York Mets. Donald Trump, you know.
Last month I flew Air Canada from Newark to Toronto to Tokyo. The 90-minute first leg consisted entirely of beverage service and my two sons wrestling for dominance over the arm rest controls. (If you have to ask why my two sons were fighting if they each had their own arm rest controls then you obviously don't have two sons). My kids kept hitting the call button, driving the flight attendants so absolutely nuts I began wondering how many more times it would be before they came down the aisle waving torches and pitchforks.
Talk about pure, genuine entertainment.
Settling in for the Toronto - Tokyo leg of the journey, while my kids were going bananas over the video entertainment system (and I was going bananas over the impending free beer system), I noticed that the seat pocket in front of me – and every other seat pocket within reach – still contained last month’s edition of enRoute, Air Canada’s mis-capitalized in-flight magazine.
My first thought: How can the guy on the cover look so happy carrying his twelve-year-old son around a museum on his shoulders? And while wearing red pants no less?
My second thought: Why can’t my kids just figure out the god damn touch-screen?
In-flight magazines are always good for a laugh. Continental/United offers up supercilious travel articles like this, while any given Chinese airline will, true to form, produce the cheapest crap on the planet, right down to the idiotic English translations.
Rarely, though, will an airline mag provide unwitting humor front to back. This sort of literary feat is normally only ever seen in the Wall Street Journal Magazine. But by the time I was finished confiscating my sons’ riot-inducing mini-pretzels and stuffing them into my seat pocket I’d realized two things. One, our plane’s video system was malfunctioning, not my sons’ brains as I had been suggesting for the past two hours. And two, Air brings in-flight magazine entertainment to a whole new level. This back issue in my hands was so good, in fact, that I only had one beer the entire flight. One! And did I mention they were free?!
For any of you not lucky enough to have flown Air Canada lately (and who knows how long this June 2014 issue has actually been gracing Air Canada’s seat pockets), do not despair. For here I give you the 30 greatest highlights of this most recent outdated eNroUTe.

1. Editor In Chief Ilana Weitzman gets the ball rolling by stating that her magazine is going to show us how globalization, rather than prostituting local cultures, “can, in fact, revive local traditions”. She then goes on to say one company they spotlight this month (and who knows how many months) is helping to “evolve local traditions” – another way of saying “changing the way other people do things so they are more like we do them”. She even bolsters my sarcastic and wholly accurate view by explaining how one Canadian is “bringing ’s heritage carpets to Canadians in a new way, revamped for contemporary tastes”. Nice try, Ilana. Interesting color scheme there, but the pattern is sooo not Eastern Canadian. Can you re-thread it a bit to make it look more like a herd of caribou?
2. As with any rag that places style before substance we see plenty of self-indulgent advertisements early on. Subaru rolls out a two-page ad touting their 2014 Impreza as “Beautiful on the outside…and the inside.” What a load of bull. Sorry Mr. Subaru Ad Manager, but I used that line all the time when I was single and it never, ever worked. (I will concede, Sir, that your use of the phrase “well-equipped” does work in your case. In mine it only got me slapped.) 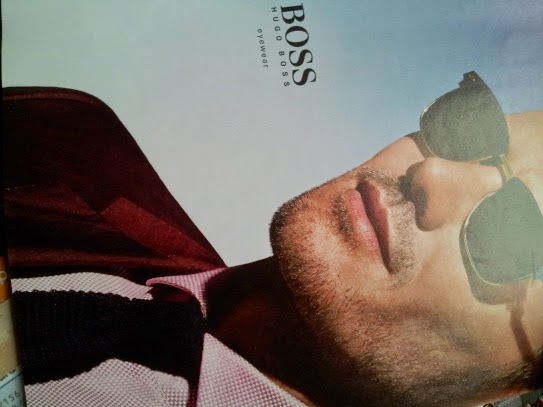 3. Hugo Boss’s ad for sunglasses urges us to “Master the Light.” Judging from the cheap burgundy sport coat, textured pink dress shirt and black knit necktie combo the guy in the ad is wearing I imagine Hugo’s shades must pretty much block out any and all light.
Lesson: Don’t wear Hugo Boss sunglasses when you are getting dressed.

4. An ad from Ciroc, makers of some kind of distilled coconut-flavored drink made from grapes (don’t ask me, I just point these things out), tells us to “Celebrate Luxury”. To be honest I have no idea what that means. The manifestation of the concept, though, is probably something like this. 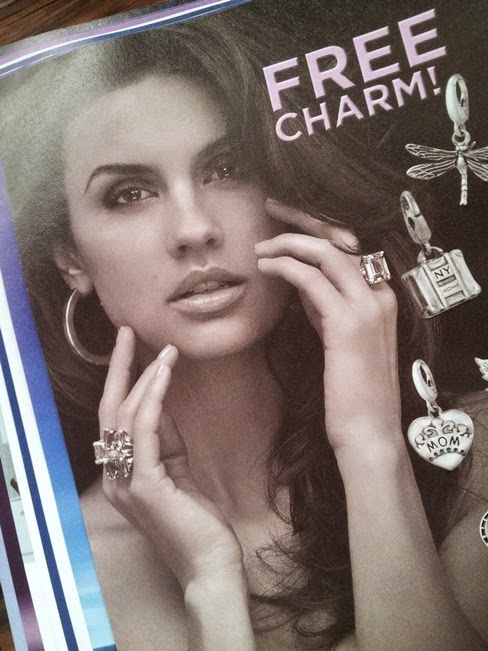 5. A half-page ad for Sterling Metalsmith jewelers showcases an impossibly beautiful woman dressed in jewelry and nothing else, her arms positioned over her breasts as she touches her manicured fingertips to her smooth, impeccable complexion in a way that makes it impossible for me to put my tray table down. “Free Charm!” it says alongside the perfect features of her face. Sterling Metalschmucks! You think she needs charm to get by?
6. In a one-page tourism pitch tries to lure potential visitors to her capital by asserting an 18thCentury castle in the middle of a modern city is “unexplainable” – and therefore worth seeing, I guess. First of all, sure, Mexico City is modern in terms of population density, crime rate and pollution levels. But as far as finding a castle in the middle of a city, I guess we can’t explain Salzburg, Ljubljana, Osaka or Lhasa (which we can now classify as modern thanks to China’s methodical destruction of its heritage) either. Tip: all these places are much safer and cleaner than Mexico City (except Lhasa thanks to China’s myopic tyranny and paranoid rules for being a good little tourist – or Buddhist monk).
7. On Page 25 Calin Rovinescu, President and CEO of Air Canada, brags about his company’s planes’ “next generation inflight (their typo) entertainment system”. Seeing as we were somewhere over Manitoba before they could get the in-flight entertainment system even half-working I’d say Calin, President and CEO of Air Canada, needs to stop celebrating his own luxury and take a closer look at the company he is ostensibly running.
8. Among a collage of blurbs about attractions in Amagansett, Long island, New York (one of them the Sea Slug Lounge, talk about free charm) is a perky bit about “Vicki’s Veggies”, where Vicki “keeps her mother’s great blueberry pies hidden behind the counter because everybody wants them”. Not exactly sound business strategy there Vicki. 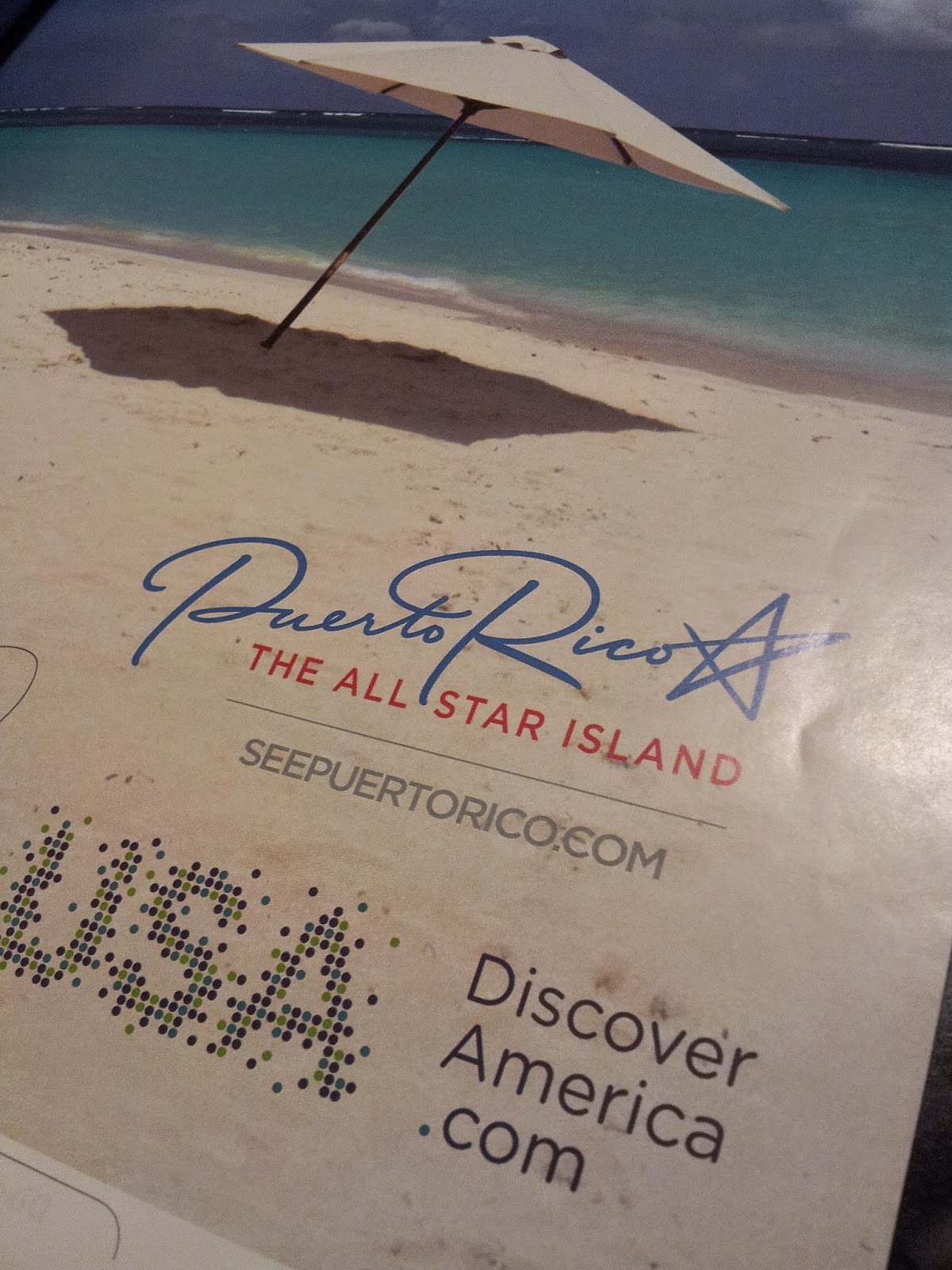 9. The first two pages for “Discover ”, a Please-Travel-The-US magazine within a Canadian in-flight magazine, is an ad for . I guess this is the beginning of the end of political correctness about our 51ststate?
(Note: #2 in this sub-magazine’s 20 Great American Adventures? .)
10. A two-page ad for the U.S. Virgin Islands (this sub-mag should be titled “Discover the American Empire”) poses the following question: “Why dress in layers when you could layer on sunscreen instead?” Ilana Weitzman and her cadre of editorial assistants (as it may be) certainly missed that one. Hey people! Freeze your ass off in or kayak naked in tropical ?
﻿
11. , casting her line into the tourism waters, tries to lure us north by mentioning golf, fishing and “a thousand other ways to put a smile on your face” – ways that, by virtue of their non-mention, probably don’t rank as high as golf and fishing. Hoo boy, get me to yesterday, eh?
12. This Go ! sub-mag ends with a piece titled “8 Great US Cities to Explore”. Sounds like a build-up to seeing some intriguing, unheralded spots across this great big nation, doesn’t it? Well, fasten your seat belts and get ready to be whisked away to… Philly, Atlantic City, Vegas, Boston, New York City, Los Angeles and Chicago. Wow, how inspired. The only wildcard in there is , – presumably included since Visit Missouri bought the next three pages of Go ! advertising space.
13. An interview with Denys Arcand (yeah I never heard of him either) opens with a question about how he felt when he moved to at age 12. His answer? “My school was right near Eaton’s, plenty of taverns and the bars of Boulevard Saint-Laurent. Soon I felt right at home.” Guess Mr. and Mrs. Arcand weren’t exactly the milk and orange juice type. 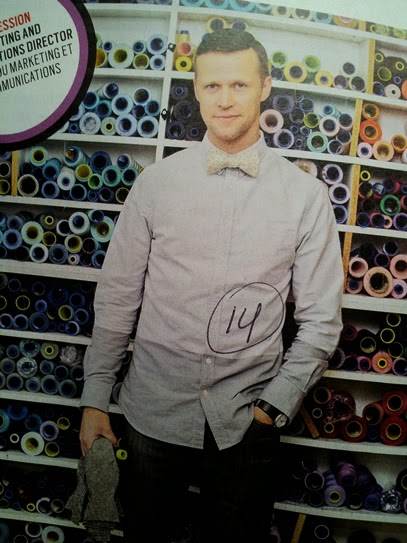 14. The piece on page 43 features a shoe salesman with a fancy title that essentially means “shoe salesman”. In the photo he’s wearing a gray dress shirt that, 3/4 of the way down, turns a darker shade of gray. It makes him look like he was very recently standing in about a meter of water. He led a nomadic childhood, he jokes, noting that “the first time I went to the same school two years in a row was in Grade 8.” Which means he either went to eighth grade twice or he never learned to count to two at any of his schools. Maybe both.
15. Next up we see an ad for a clothier who sells at least one dress that makes the wearer look like a cross section of a pear. A red pear. With feet, and a head. Okay so maybe she doesn’t look like a pear, exactly - though she could definitely pass for a Monsanto pomegranate.
16. After a lengthy piece on great museums for children (can’t disparage that) we get our look into the world of “old Turkish rugs that have been spiffed up for a contemporary look”. At first this struck me as farcical as whacking a wooden table with a bicycle chain to give it that great and false antique flavor, or selling at twice the price jeans that have been fashionably pre-ripped. But then it occurred to me that I had it all backwards. What they are doing to these “old” rugs is more akin to painting the faces of today’s beautiful, soulless celebrities on DaVinci’s The Last Supper. You like my rug? Well thank you, it’s Turkish… Yes I know, well it looked too, I don’t know, Turkish, so I had it redone so it wouldn’t look so, you know, Turkish. But it’s Turkish… 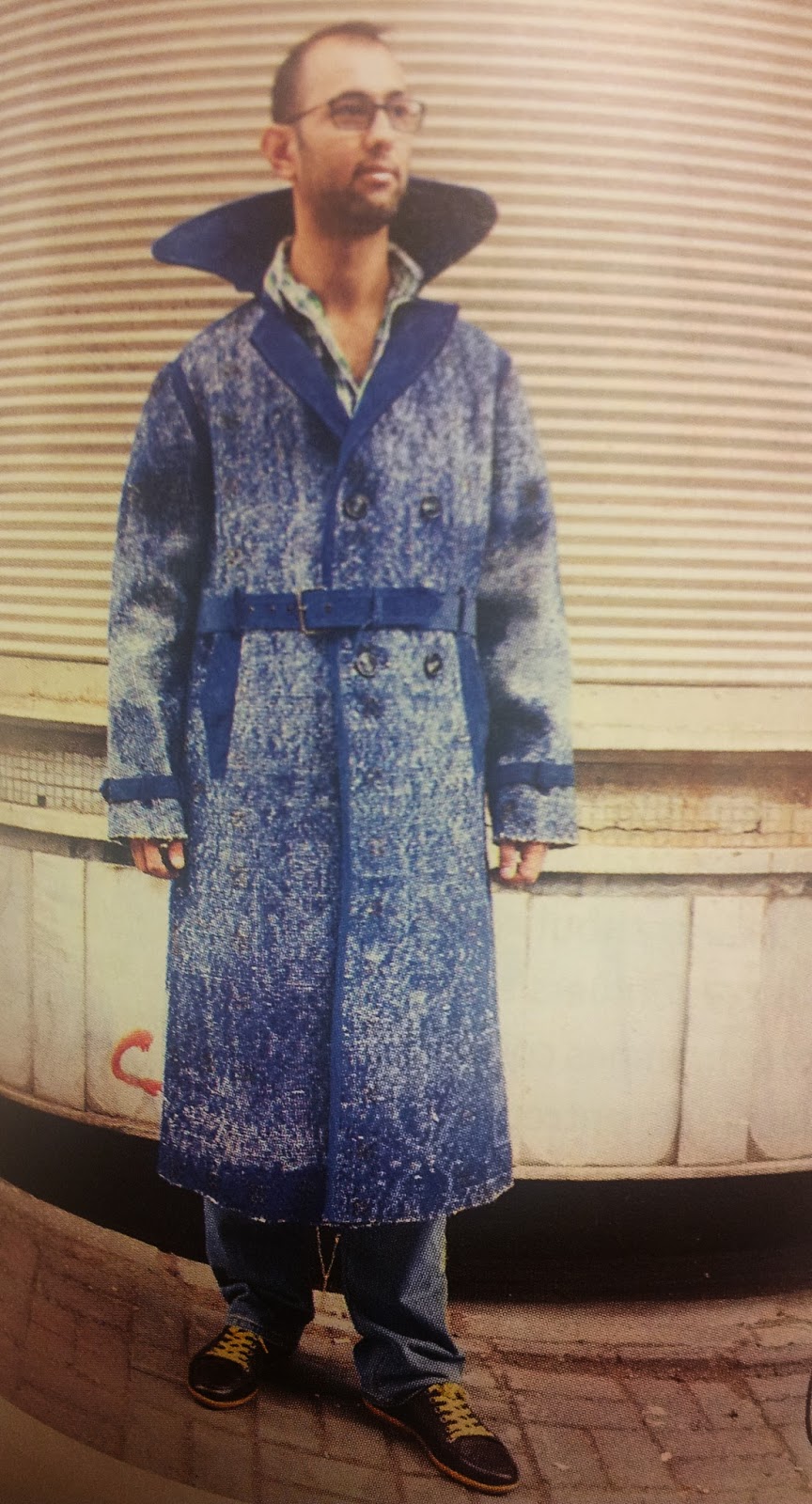 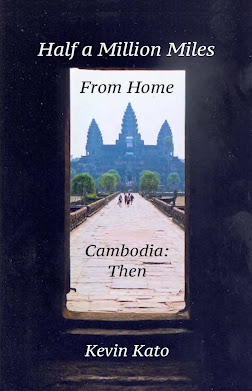 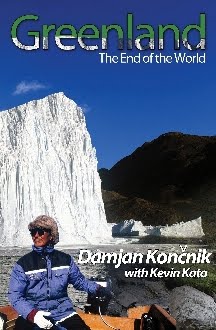 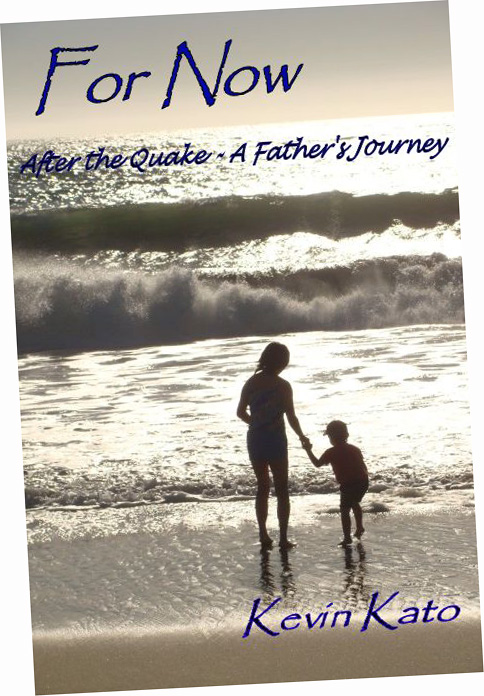