My wife’s wallet is fat with stamp cards. Card for the gas station, card for the camera store, card for a curry shop I don’t think she’s ever even been to. She doesn’t even like curry. I myself don’t have the organizational skills to keep track of a stack of store cards, even if I did possess the inclination to hold onto them or the capacity to remember to use them. My wife hands me a supermarket card as I am heading out the door of the apartment, and by the time I’m walking through the automatic doors two minutes later (assuming I hit or ignored all the traffic lights on the way) I’ve completely forgotten about it.

Really, it’s hard to exist in Japan without amassing at least a modest collection of these insidious little gimmicks. I have a mess of them in a drawer from the haircut place up the street; I never bother or remember to bring the last one I got but I feel culturally insensitive if I don’t let them make me a new one. And every time I promise to bring my others to combine them and see what sort of discount I can get on my next cut. I may have enough to take over the place. Then once I do I am going to get rid of the stamp card system.

Before Japan outlawed free plastic bags at the supermarkets they gave out little green stamp cards to encourage people to reuse their old bags. I’m a pretty green guy, I reuse anyway, but I kept my ‘green card’ (get that double entendre?) (no wait, triple!) and after twenty eco-friendly trips to the market I got a buck off my eighty-dollar bag of rice. Once I did forget my card and they politely insisted they make me another one, the extra paper cancelling out the good of reusing my old bags but hey, this is the system.

I can’t even be bothered with frequent flyer mileage clubs. Fortunately, the wife can. She is a wizard with those alliance connections. (Okay, wizard is male but I can’t think of the female equivalent, unless it’s witch, a term that does not apply to a woman who gets me a free flight somewhere – but can apply when I forget to use my stamp card at the supermarket.) I think she’d flown exactly once with Alitalia when she sat down at the kitchen table one day with a stack of pens, two clean notebooks and a pile of mileage cards and mailed point reports from every major airline in the world, including a couple that didn’t even exist anymore. After two days of nothing but cheese sandwiches and No-Doze she had figured out how to squeeze Alitalia for two free tickets from Milan to Casablanca. And now, it seems, she’s done it again.

Even though my older boy is now three and thus eligible to fly for the same price and fuel surcharge as the average amateur sumo wrestler, my wife managed to score three free seats from some Asian carrier or another, valid in the next couple of months within a radius that includes Hong Kong, Guam and Saipan. A little time in any of these would be the perfect antidote to winter and the sprawling disaster area that is the unplowed Fukushima road system.

Instead we’ve decided to head over to the world’s most recent political and military center of instability.

Nine years in Japan and I’ve yet to see Korea. This of course does not count transfers I’ve made at Incheon International, which resembles a high-dollar shopping labyrinth with an airport attached. But if the two Korean airlines I’ve flown give any measure of what awaits, I think I may be able to look past the occasional overhead DPRK missile.

I look forward to airports and flights almost as much as I look forward to the place I am going. I’m serious, this is not a typo. An airport’s atmosphere is so often a reflection of the country it is almost like taking a glimpse into the present state of affairs of that country. A stopover in Beijing two years ago was a display of everything I heard about the city itself as it was preparing for the 2008 Summer Games. The floors and handrails and glass were so polished my eyes began to hurt after a while; then I opened a door to what I thought was a bathroom and saw a grimy room full of dirty peasant children attaching elastic strings to those baggage tags you’re supposed to fill out. Meanwhile, as a group of cheery-eyed young girls laughed and played with my then-one-year-old boy as he crawled around on the spotless floor, a man with rubber gloves and a forensic evidence kit worked the trail of prints and drool my son had left behind.

Mohammed V International in Casablanca had palm trees lining the road curving gently into the terminal area, where not a single person could be seen working save for the hordes hawking taxi rides. Casablanca itself was just like this – except for the part about the palm trees. Papeete Airport in Tahiti (also known as Faa’a International) was intimate, open and right on the water (on reclaimed land, apparently), and was electric into the wee hours with a crowd that seemed more local than traveler. That I didn’t have enough time on my layover to take a stroll down the street seemed regrettable until the guys at the currency exchange counter invited me into the back room for a round of bourbon and cokes. I’m trying to reconcile this with the fact my wife does not have an Air Tahiti Nui mileage card. On the other end of the good-times spectrum, at any airport in the US the security borders on paranoia. But once your shoes and belt and bodily orifices are cleared of all explosive devices you can go pick up a gun at Wal-Mart.

It’s tougher to see the soul of a country from the flight crew, but in some cases the resemblance is amazing. For our three hours from Milan to Casablanca, and back again a month later, the Alitalia crew didn’t quite seem to remember there were actually passengers on board. On a trip to the bathroom I passed an attendant sitting and reading a magazine. She didn’t look up because, I am convinced, she forgot she was at work. Or, perhaps just as likely, she didn’t give a cannoli. This contrasts with the cabin crew of any flight on any Chinese airline. They are keenly cognizant of your presence, and are quick to convey how annoyed they are by your inconvenient existence. The baggage handlers are an equally perturbed bunch, as I have witnessed both in person at the check-in counter as well as indirectly at the luggage carousel. Flying a Chinese airline is like buying any other Chinese product, and I will leave it to the reader to decide just what that means. 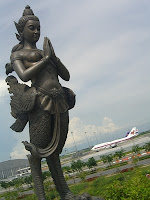 But by and large I love and prefer Asian airlines. Admittedly I am hormonally biased but the female flight attendants are generally beautiful creatures, a mix of swan, silk and lotus flower. They are polite and engaging and they give you free beer. By the end of the flight I don’t even care where I am. A couple times I’ve forgotten which country I’ve even landed in but wow didn’t that one attendant have the sweetest laugh. If my bags are in good shape at baggage claim I can assume I am not in China. If the customs officer doesn’t treat me like I’m the Emperor then I’m not in Japan. From there I don’t care which airport I am in, and the less it looks like Incheon the better if my theory holds true.

Leaving Phnom Penh International was like getting off a hotel elevator and expecting the lobby but instead stepping out into a back alley. For me this is not a problem; I don’t want a concierge when I travel. I want to be hit immediately with whatever the country has in store for me, and that can include a military presence or a sense of anarchy. Phnom Penh International did not disappoint in either of these.

Bangkok’s relatively new Suvarnabhumi Airport (also known as the ‘Airport of Smiles’) is, like Bangkok itself, big and modern and chaotic. Seven floors all connect in practicality via a series of long moving walkways which are heavily magnetized (like the floor of the prison in the Travolta/Cage classic Face Off) to keep luggage carts from becoming lethal weapons of rolling destruction. The same seven floors are also connected in atmosphere by a huge atrium, giving anyone anywhere in the terminal the sense that this is a big and wonderful place that can take you out with one faulty magnetized walkway. On the ground floor cab drivers swarm the new arrivals, while backpackers pound on the Internet kiosks that keep eating their coins. My first time in Suvarnabhumi, once I’d realized I wasn’t in Amari Airport (where I landed on my first trip to Thailand), I decided to find a quiet corner and try to catch a little shut-eye. I ended up spending the night in a little-used and evidently little-known room on the seventh floor, next to a cordoned-off Buddhist altar and in faint earshot of the ongoing bustle of Suvarnabhumi and of Thailand itself.

So what to make of Korea? Both Asiana Airlines and Korean Air provide, based on my limited experience, excellent service (provided by excellent flight attendants). The good folks at Asiana Airlines even went so far as to put the bike tool they confiscated from me at the gate into a padded envelope with my name and flight number on it so I would have no problems retrieving it once we’d landed in Kuala Lumpur (which aesthetically resembles nothing in Malaysia except the Petronas Towers). Yet Incheon itself gives an impression of ultra-modern, ultra-soulless ambition. I suppose I’ll just have to wait and see for myself, up close, what Korea is all about. With visions of beef barbeque and kim chee and crowded marketplaces full of people whose words I don’t understand, I’ve got pretty high hopes.

Add a crew of silky, swanlike lotus flowers to the equation and I’ll have no problem when my wife wants to go a second time so she can use all those new stamp cards.
Posted by Kevin Kato at 5:49 AM