Staying in the Right Now

United Airlines CEO Jeff Smisek must not have read my post from July 8th because soon after that sharp-witted dagger attack I received notice of my new Premium Silver Club status in the mail.  How he knew to mail my club member card to and not is a little freaky; maybe he did read my post and is trying to shut me up by playing nice. Not going to work Jeff, but I’ll take the extra legroom.
I’m sitting in a near-empty lounge in Narita’s Terminal 1. It’s 6:30am, I’m fresh off another overnight bus ride from (typically, I got nearly zero sleep), and I’ve got four hours before first boarding call. Perfect. Time to relax and take in my surroundings.
I’m alone by the way; the wife and kids will remain in for a few more weeks. There have been many moments recently when I felt I couldn’t get away from the boys fast enough; the younger one clings to me like shrink wrap and hasn’t learned yet the concept of sharing toys, while the older one, as good as he tries to be in the face of the two-year-old fury that is his brother, can only keep his frustrations at bay for so long. Alone now, I can close my eyes and enjoy the peace of solitude. And I find that I already miss being able to look at my sons.

To my right, what once was a coffee shop is now a Subway. On the flat screen in front of these rows of seats (I’m taking up three of them) news bits pass by in an ambitious slideshow: the Japanese athletes have all returned with their Olympic medals; something’s going on with Greece’s economy; the Fukuoka Softbank Hawks won last night but their veteran leader Hiroki Kokubo has announced his retirement after recently getting his 2,000thcareer hit. A virtual aquarium comes on screen (rays, eels, the world’s largest grouper), followed by a commercial for ‘NariTra’, a “multillingual” speech translation application.  Spellchecker apparently not included. Next a commercial for Visa, centered around a white guy in a blue shirt and khaki shorts doing a ridiculous happy dance on the side of Mt. Fuji, then in a restaurant, then on a sidewalk in London (all of it a different version of this). Who comes up with this stuff? And who pays the people who come up with this stuff?
On to the World Weather Map. The entire earth appears to be sunny except for two places – where I am now and where I am going.
They offer free Wi-Fi here at . The luggage carts are free too, as is the pleasant disposition of every single person working here. Contrast this with JFK in , where you get $4 carts, coin-op internet portals and a personality crapshoot with the odds stacked heavily against you.
At check-in I flash my shiny new Premium Silver Club Card and ask if there is any preferred seating open. The attendant smiles as she politely and apologetically tells me that unfortunately there is nothing available. I then ask if I can at least get a free beer; she giggles, either because she understands or because she doesn’t. I dump my two 49-pound bags, leaving me with a knapsack full of my son’s books and a cardboard tube with the map of I bought my first week in , eleven years ago. At the security checkpoint I realize I still have a thing of coffee in my pack; I apologize to the very nice people who just let me proceed to security, they very nicely let me go back out to the main terminal area, and I drag my backpack, my son’s books inside getting heavier and heavier with every step, back to the lounge to relax and polish off my room temperature home brewed sludge.
There’s that paunchy guy with the khaki shorts doing his jig again. Everything is on a loop, so I get to see all the rays and eels and grouper several more times, as well as the same news bits and the sunny weather covering the whole rest of the world. It’s eight o’clock by now – seems a lot of people don't mind eating Subway for breakfast. I flip through my passport; sadly, it expires next month. All those flights, all those border crossings, all those fantastic adventures…and here I am on my way back to the town I grew up in. One stamp tells me I entered exactly one year ago today. Two dozen pages of other stamps make for a disorganized display of all the times I’ve criss-crossed the oceans in the last ten years. Now with my oldest kid starting kindergarten and the prospect of soon having to buy five tickets whenever the family travels together, I wonder how long it might be before I’ll be needing a new passport.
On my way to security for the second time I pass a currency exchange counter. From a side door two men in uniform emerge, one pushing a cart with a plastic tray holding two black boxes. BRINKS it says across the men’s backs. For a moment I consider screwing with them, joke like I am going to swipe one of those boxes from off the tray sitting out and open on their little platform cart. This is how to finally understand the limits of Japanese kindness.
Through security and on toward Gate 51, which is the closest gate down the hall to the left. This never happens. I always have to walk to the far end of the terminal. Maybe it has something to do with that silver card in my wallet? Out in front of the duty-free liquor shop a girl is offering free samples of Remy Martin XO, $165 per 700mL bottle, give or take. ‘You have any today?’ I ask her as I down my free shot. ‘Not yet,’ she replies, and I know I will never ever tire of these wonderful, sweet, smiling women.
I‘ve always assumed duty-free is a big joke: pay above-value prices so you don’t have to pay tax on it. Doesn’t anyone else get it? I have no idea how much a bottle of Remy XO costs normally, but I did check the price of a liter of Jack Daniel’s – 3,000 yen, or roughly $36. Is this a deal? Really? (No price check on the selections at Lancome and Estee Lauder, sorry ladies.) 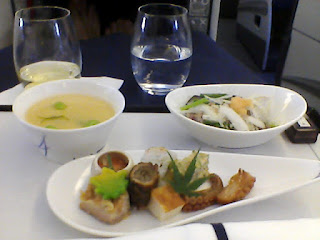 My little square ceramic plate cleared away, the flight attendant – one of them, I don’t know, there are a whole bunch of them and they are all so incredibly, magnificently…oh man somebody find me a thesaurus. She spreads a tablecloth over my tray. A smile. A bow. She wants nothing except for me to be happy.
God…
Forget it, I’m putting Mr. Ito’s picture on our wall instead.
Man On A Ledge: Ed Harris looks depressingly frail compared to when he played Brigadier General Frank Hummel in The Rock. Edward Burns looks skinnier too compared to how I remember him in his Confidence days. Even Kyra Sedgwick, a rail to begin with, looks malnourished. Must be that ugly red coat they’ve got her wearing. A Burberry probably.
A trip to the bathroom tells me why they don’t let people from economy use the bathrooms in business class: the hordes would pilfer all the free towelettes and toothbrushes and packets of skin lotion sitting there on the shelf.
Back at my seat and lunch is served. Along with a fresh glass of wine. Grilled flounder for the main course. Holy Schmoly what do they have back there, a freshwater pond? This stuff is nothing short of miraculous. As is the flight attendant smiling lovingly at me, asking me if I need anything else.
The woman across the aisle and a little behind me (I think her passport read ) has been plowing through this thick binder of papers since I first boarded the plane. In front of her, meaning ten feet away from her, and a long stride forward of me, is an Asian man, maybe Japanese, with extremely neat and matted hair, eye glasses, a dark blue sport coat and, as far as I can tell from this angle, nothing on below except white boxer shorts.
The remainder of the flight consists of periodic sampling of the menu – udon and Japanese sake; fresh-brewed coffee and vanilla ice-cream; Spanish omelet with fresh bread and a nice Chilean red. I make another trip to the restroom, where I find out the people in business class can pilfer stuff with the best of them. I take in a couple more movies (The Tourist, Seabiscuit). I am showered with more beautifully endearing smiles than one guy with a silver card deserves. And, shortly before landing, I come across this quote from a Q&A session with Ai Futaki, among many things a freediver, meaning someone who goes sea diving without air or equipment:
Q: Does freediving change people?
A: It can change people mentally. Busy people live lives with themselves at the center. They don’t observe themselves from outside. When you learn freediving, you have to learn how to observe yourself from the outside and be calm. It is a kind of underwater meditation; not to worry about the past or future, what’s going to happen…to just stay in the right now.
Exactly, Ai. Just like me and my beautiful flight attendant friends.
Although I do kind of wish my family were here.
** NOTE: I just researched the guy dancing on that Visa commercial. His name is Matt Harding, and my hat goes off to him. Check this out. The world needs more Matt Hardings.
Posted by Kevin Kato at 2:54 PM