One of those islands, Burano, was named after the Porte Boreana, the North Door. Burano is known for having lots of fishermen, dwindling numbers of traditional lace makers, and homes that make Martha Stewart look like a bore. 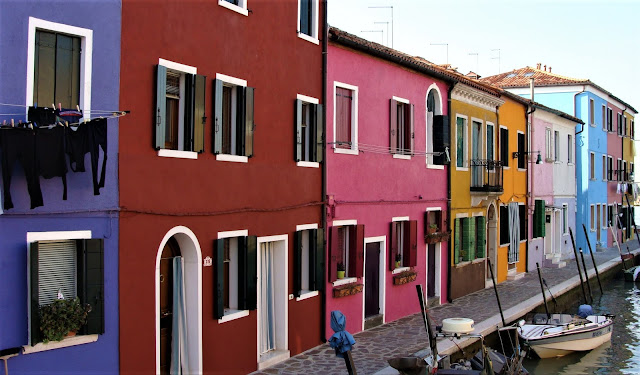 Legend has it that the fishermen of Burano began painting their houses in bright colors so they could see their way home in a thick fog. For somewhat similar reasons I've painted a bright orange path on my floor from my bed to the bathroom.

Another bit of suspicious lore is that the people of Burano paint their homes in bright, contrasting colors so it is easy to tell where one house ends and the next one begins. If this is indeed the case I can only imagine the tension in winter when people are required to shovel the snow off the sidewalk in front of their house.

Interestingly, for all the crayon box gaiety there are restrictions on what colors people are allowed to paint their homes. And different neighborhoods apparently have different color wheels that the people can choose from.

Christ, you'd think the authorities would cut them a little slack after all they'd been through with the Huns and the Lombards.


Perhaps only slightly less noticeable than the colors of town but certainly more concerning than even the municipal color code is the bell tower behind the Parrocchia di San Martino Vescovo, a.k.a. the San Martino Catholic Church. Built in the 17th Century, this 53-meter tower began leaning with the slow movement of the ground underneath. An angel stood atop the tower until 1867 when it was blown off in a storm. An iron cross now stands in its place - until the next big storm or barbarian invasion. 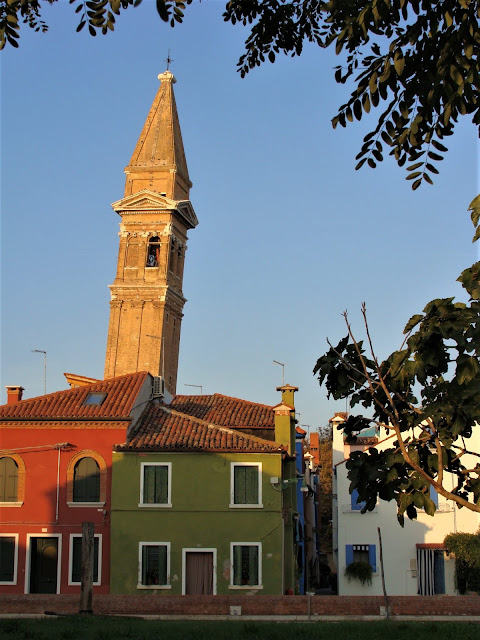 This disaster in the making and the church it is going to eventually fall on stand on the south side of the Piazza Baldassarre Galuppi, the town square that, amazingly, has the same name as the man whose statue stands right there in that plaza. What are the odds?

Burano-born Baldassarre Galuppi was an accomplished and well-traveled composer who would become known as "the father of the comic opera". Though his first opera, composed at age 15, was largely unsuccessful, Galuppi went on to hold lofty positions in Venice, Florence, London, Vienna and St. Petersburg where he served as court composer for Catherine the Great. Follow him on Twitter and Instagram. 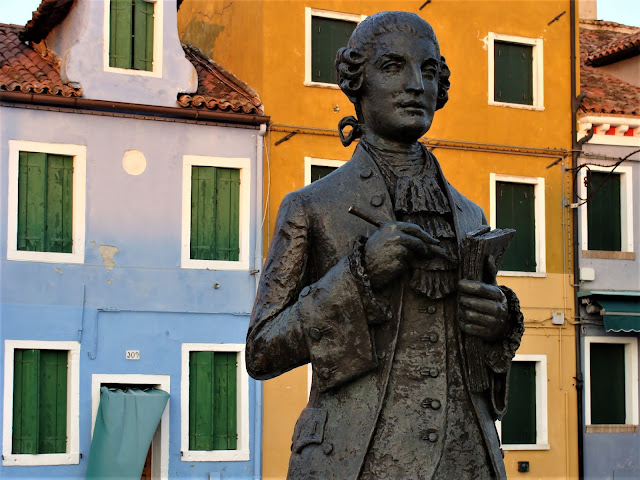 This memorial to Galuppi was sculpted by another artistic product of Burano, a man by the name of Remigio Barbaro who, though locally celebrated for his work, evidently does not merit his own Wikipedia page. 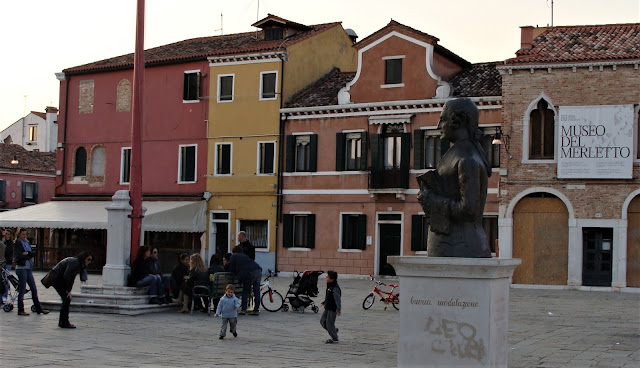 Across the square from the impending catastrophe is the Museo del Merletto, which lays out the history of Burano lace-making from the 1500s (so I hear, I never went in). 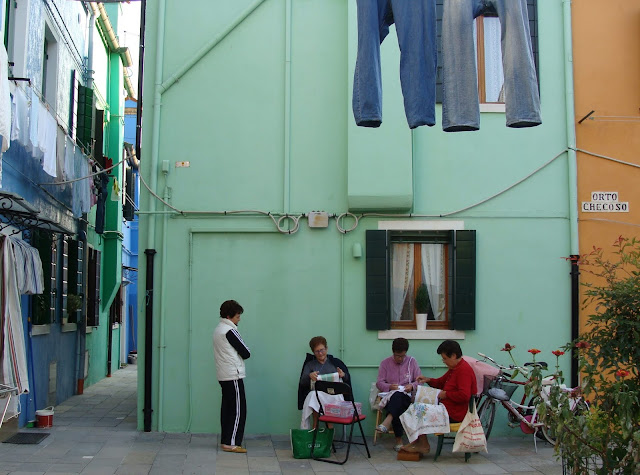 Lace-making in Burano dates back 1500 years. Legend has it that a fisherman, engaged to be wed, was out on his boat one day when a mermaid or a siren of the sea or maybe a Lombard with a tail came up to his boat and tried to (ahem) entice him to follow her. When our virtuous hero refused the lovely and manifestly psychotic creature whacked the side of his boat with her tail. The fine spray, it is said, turned into the finest wedding veil ever seen. Since then the women of Burano have been trying to imitate the beauty of that veil, the result being the traditional craft of Burano lace.

Burano lace is a time-consuming art, and is thus quite expensive. This in turn has not helped propagate the lace-making species - there are very few makers of Burano lace left (not counting all the Chinese people making cheap counterfeit versions of the stuff). 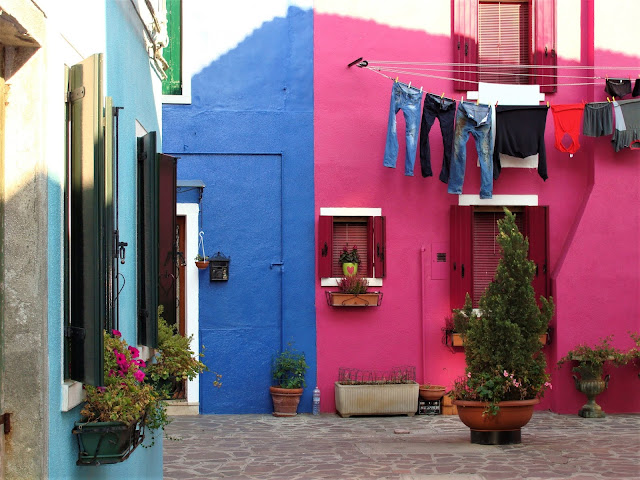 Burano, like Venice, is an island with canals. The people of Burano, like (most of?) the people of Venice, do not have to get in a boat if they want to walk out their front door. Burano actually has just three canals, with most of the rest of the town webbed with streets and walkways of stone. It's a fantastic place to just wander for a while - though I have to wonder how fantastic the people who live here think it is with strangers with cameras constantly walking by their windows. 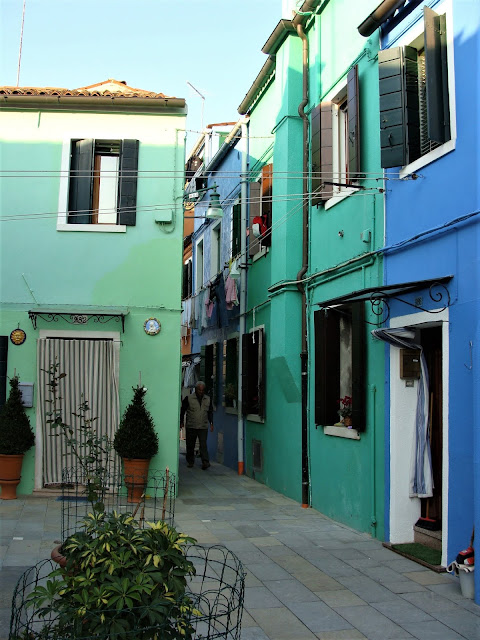 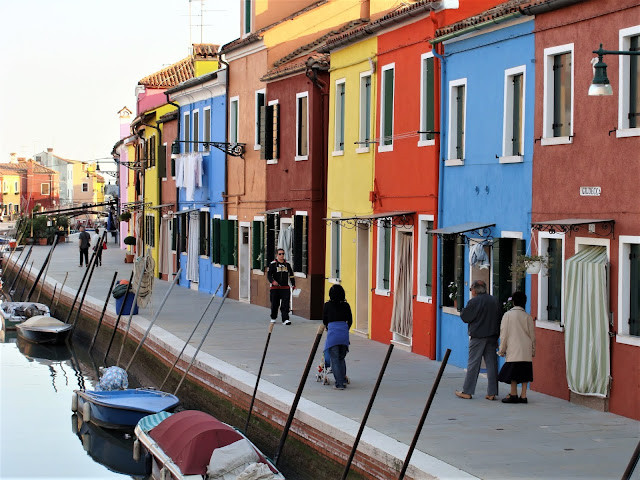 But there are a few bits of grass on the island. 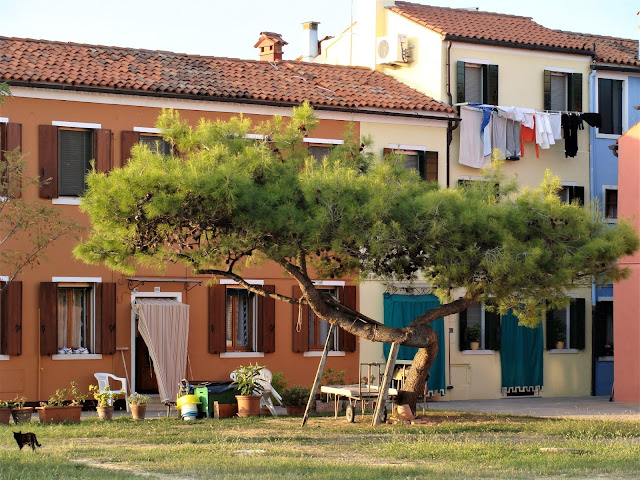 And the people here do eat. And not just fish. 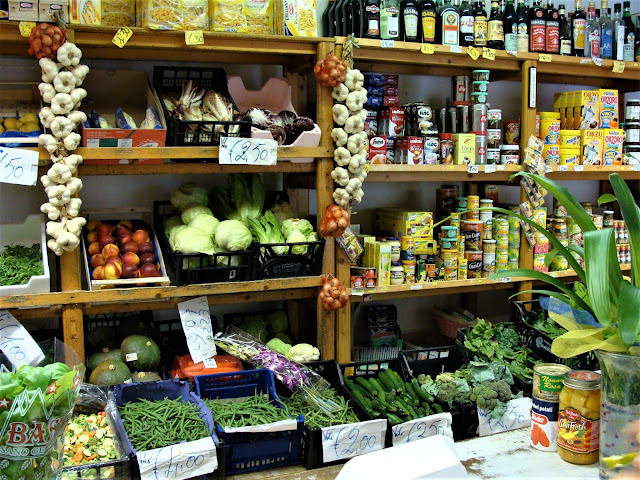 Yes, Burano is striking, and charming, and romantic. But it's way too easy to get wrapped up in the colors and find yourself staring in someone's window. Not that I ever did.

All the windows I looked in had their curtains drawn. Probably not by accident. 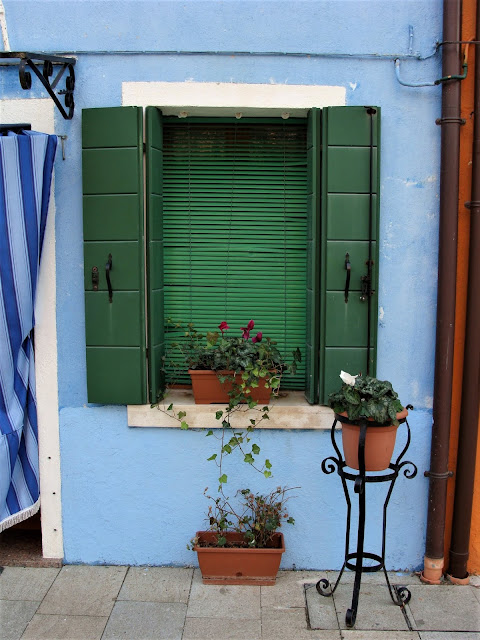 I wonder if these people's houses are this colorful inside. 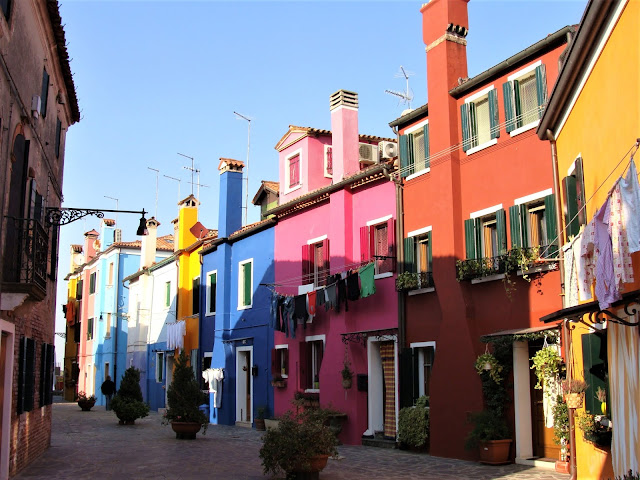 It'll probably take a barbaric invasion to find out. 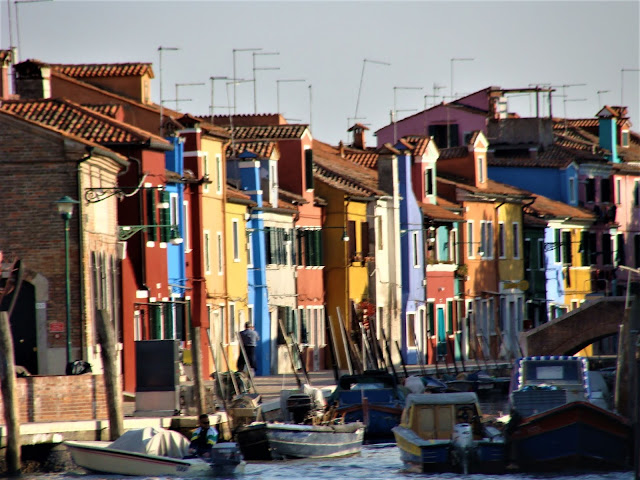