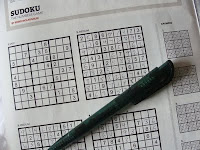 I step through the door and come face to face with a half-naked middle-aged man. Well not face to face; he’s turned toward the wall so all I see is his pasty, mealy back. On the shelf in front of him is his open carry-on. He’s slathering on his deodorant. I feel like I’m at the YMCA.

The door to my stall bangs shut as I step around the corner – to see another shirtless fifty-something man bent over one of the row of sinks. His gut rests on the countertop as he washes his face. This guy didn’t make it far in the Gladiator audition process either. I take one of the sinks on the opposite wall…and there’s the guy, his back and his front, reflected infinitely in our opposing mirrored walls.

Really, this is nothing compared to a Japanese onsen in terms of proximity to naked strangers and their degree of nakedness. Still, I can’t wait to get on my flight to Tokyo.

Along the otherwise drab walls of Newark Airport’s Terminal C large back-lit advertisements pine for attention. I’ve got plenty of time before my flight’s final boarding call so I stop to read each one. Brief and bold and paper-thin, they seem aimed at the time-pressed and travel-weary. I am neither.

A duck with a jovial look on his beak is standing on the middle of a row of three seats, doing that mating call thing with his wings. He’s ostensibly on an airplane, although those three seats are surrounded by a white empty void. (All that legroom and who do they give it to? A duck.) The ad is for an insurance company. ‘Nobody flies stand-by with our coverage,’ the sign states in proud blue letters. Someone just off a twelve-hour flight might nod at the duck in agreement and file the thought safely away in a rolling drawer of gray matter labeled ‘True – Don’t Know Why’. But really, can’t this be taken two ways? Inviting as he appears, I don’t think that duck is giving up his seat.

Beyond an ad for a cancer clinic (as if the time-pressed and travel-weary need that to think about) comes a promotion for 4-H. I’ve never belonged to 4-H, but I get the impression this is an organization dedicated to the empowerment and advancement of society’s youth. They even seem to be specializing now – this particular ad is sponsored by 4-H’s Science, Engineering & Technology faction. Imposed on another empty white void a young girl in a white lab coat is holding a test tube of soylent green. Next to her reads a supposedly uplifting pronouncement: ‘One million new scientists, one million new ideas.’ That averages out to one idea per scientist. I’d say 4-H needs to raise the bar a little.

Newark’s Terminal C, by the way, is dedicated to Continental Airlines, as Newark International is one of their hubs. This would, on the surface, account for the inordinate number of ads for Continental. But really, pretty much everyone in the terminal is already a Continental customer. Shouldn’t they be hanging these ads over in Terminal A?

One of them is for Continental’s Mileage Club Credit Card. In the sky over a white-sand beach that rolls lazily toward a calm blue-green surf it reads: 'No one ever says I take too many vacations.' This is a lie. I myself have said just that, more than once. I was just kidding, of course. My wife, on the other hand, wasn’t. Either way, I don’t think Continental wants one of their cards in my hands.

Another ad states that this mileage club card is ‘The official card of the Continental loyalist.’ Maybe I watch too many movies, but aren’t the loyalists always the ones who end up dying for the king?

As I stated in my last post, Continental is merging with United. In the gate area (and not out at the check-in counter, where it would help people understand why Continental’s check-in people are politely cramming United Airlines policies down customers’ throats) there are signs everywhere announcing the developing collusion. ‘You’re going to like where we land,’ claims one. Oh yeah? Tell you what, your Highness, I’d rather you just land where my ticket says you are going to land.

But we’re getting ahead of ourselves. Let’s get through take-off, shall we?

It’s interesting how virtually everyone flying economy will casually rush to line up at the gate at the first mention of a boarding call – which of course gives priority to First Class, Business Class, Business First Class, Business Elite, Premier Club Members, Premier Club Gold Members, Advanced Club Members, Advanced Club Gold Members, Advanced Club Silver Members, Silver Select, Silver Elite, Express Pass Members and any poor souls flying economy with children. If I’m with my family you can bet I’m right up there taking advantage of the chance to board ahead of the rest of the back of the plane. It does make settling in easier, but more than that I’ll take anything I can from an airline that says my little kids qualify for the same fuel surcharge as the fat cats up front who are being served free beer and wine while most of economy is still standing on line at the gate.

Last week I flew alone, and since I am not a member of any pay-to-feel-special clubs I had to wait to get on with the rest of economy. So there I am in the lounge, sitting tight through each general boarding call, wondering as I always do why everyone is so eager to get on line only to have to stand there for ten minutes with their carry-ons and laptops. But I guess if everyone stayed on their butts like me waiting for everyone else to board no one would go anywhere.

I’d like to see it just once. It would be magnificently surreal.

Besides being able to relax in the waiting area those extra minutes before settling into a seat on a plane for twelve hours, boarding last brings another, slightly more sinister pleasure. By the time the other remaining stragglers and I are coming down the aisle, anyone sitting next to an empty seat begins harboring fantasies of having that extra space to themselves for the entire flight. Some of them even start spreading out their stuff, overcome with hopeful anticipation. Others keep one sideways eye on us last few passengers, pretending to ignore us while simultaneously trying to will us away. I know, because I’ve done the same thing. In either case, it’s funny to see the disappointment suddenly appear on someone’s face when I show up in the aisle, apologizing for having to make them move all their crap.

I’m nice about it though; we’re going to be sharing an armrest for the next twelve hours after all.

My flight last week took off at 11:05. I was still making my way toward my seat near the rear bathrooms, and people were already fluffing and propping their pillows behind their heads. Some had those horseshoe cushion things around their necks. A few of them were already wearing them, before they even got on the plane. The flight, by the way, was at 11:05 am. What was there, a narcolepsy conference in Newark this weekend? These people are going to miss first beverage service.

Amazingly, they all seemed to make the flight – no empty seats anywhere.

So I’m settling nicely into my aisle seat. 43-D. My shoes are off and stuffed under the seat in front of me where they will stay until we reach the gate at Narita. (I’ll have plenty of time to put them on while everyone else is standing in the aisle, waiting for First Class, Business Class, Business First etc. etc. to clear out so they can rush off the plane and go stand on line at customs and then again at the baggage carousel.)

I’m flipping through the in-flight magazine, Hemispheres, checking to see if the previous passenger screwed up the sudoku, when the woman next to me leans over and puts her ear over my nose. She’s talking (in Korean, I think) with the woman across the aisle in seat C. Meanwhile the girl behind me, perusing the channels and games on the TV on the back side of my headrest, seems to think ‘touch screen’ means ‘jab at screen hard as you can’. My head is literally bouncing off the headrest; my nose bumps up against my neighbor’s eardrum. Fortunately this woman and the person across the aisle I figured was her mother suddenly agree on something and they both begin waving at someone a few rows up on the other side of the plane. Then they sit back, both of them eyeing me.

A tap on my shoulder. A girl appears in the aisle next to me. She smiles and leans over. She’s not unattractive. In broken English she asks if I wouldn’t mind switching seats, adding with a few hand gestures she’d like to sit with her mother and grandmother. She tells me she’s in 40-K, a middle seat. ‘Sorry,’ I tell her. ‘But you can switch middle seats with your mom if you like.’

Meanwhile the girl behind me is frantically scrolling through the children’s movie selections. I get up and turn to her for a no-nonsense round of show and tell. After that she either understands what touch means or she decides she’s better off just not watching anything for the entire flight.

Apparently the royalty at Continental-United are really banking on that loyalist campaign.

The sudokus are clean in my Hemispheres. By the time the crew begins beverage service I’ve already given up on the one labeled ‘hard’ and moved on to one of the mediums. When they come back to collect our plastic cups I’ve already decided to see if the other medium is any easier. Along with the crushed cups and overturned juice boxes there are a few empty beer cans on the cart. The woman next to me is struggling to doze off under her blanket. It’s 12:30pm.

Time to check the movies on offer.

On my previous flight I watched The Last King of Scotland, the story of a young Scottish doctor who goes on a medical mission to a small Ugandan village and ends up one of dictator Idi Amin’s inner circle – until the heavy-handed new leader finds out what this young doctor has been doing with his favorite wife. The movie is listed under comedy. There was absolutely nothing funny about Idi Amin.

Another comedy selection is titled If You Are the One, Part II. I think we can assume how Part I went.

I decide to watch The Reader, which opens with Ralph Fiennes in a lush Berlin apartment in 1995. It is morning. A naked woman walks into the room. I too was in Berlin in 1995, and I can tell you that it was nothing like this. But I manage to suspend my disbelief and keep watching.

The rest of the movie features a different woman, who keeps showing up naked, most often right along with her young boyfriend. And though it is quite well done it dawns on me this might not be something those around me want to see or should be seeing.

I glance around. Virtually everyone is sleeping.

After a long moment leaning against the emergency exit door, staring through the window out over the Hudson Bay, I sit back down and start perusing the pages of my Hemispheres. This proves an experience deserving of its own post, coming soon.

After I go take a bath with a few Japanese men.
Posted by Kevin Kato at 10:20 PM