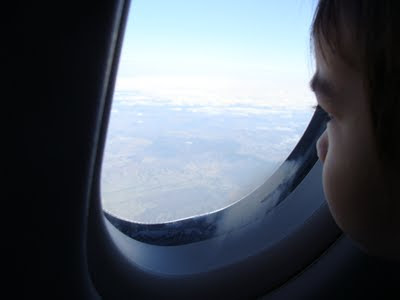 Last week I flew from Newark, New Jersey to Tokyo’s Narita Airport. (If this were a facebook status update I’d simply say ‘EWR-NRT’, assuming such snark has not yet become passé.) It had been a while since I’d flown –six weeks almost – so it took no time for the incongruous wonders of air travel, like the burn of a jalapeno, to rip into my senses once again.

Of course, the physics alone are mind-boggling. I’m sure Orville and Wilbur never imagined an eight-million-pound plane, loaded with another eight million pounds of people, luggage and processed dinner omelets, could make it over a sand dune let alone the Pacific Ocean. Legalized extortion (commonly known as the fuel surcharge) notwithstanding, that we can in twenty-four hours get from any semi-major city in the world to any other semi-major city not currently steeped in rioting and/or armed conflict is nothing less than an everyday miracle (until we figure out those wormhole things). Yet people will still complain about the dinner omelets.

However many times I’ve flown, the experience still makes me giddy. Feeling the lunge and thrust of a plane leaving the ground; looking down on land and water lying six miles beneath my squished nose; being able to doze off while hurtling through the atmosphere in a metal tube held together with bolts no thicker than my thumb; human accomplishments in aviation are indeed a wonder to behold.

Which makes the prevailing thought processes driving the whole air travel culture that much more incongruous.

‘This is a bicycle,’ I said as I laid my tandem, disassembled and all bungeed up tight in a bicycle bag, on the conveyor belt/ scale thing at the check-in counter. (I have no idea how those two can be combined.) ‘It’s kind of fragile,’ I told the woman.

‘Do you want me to put a fragile sticker on it?’ she asked, oblivious or maybe just used to the fact that her red neck scarf had a ridiculously huge bow in it.

‘Yes, please do.’ It had made the trip to Thailand fine, wrapped in foam inside a heavy cardboard box. But that box and all the foam were now in a dumpster in Chanthaburi somewhere, and I was a bit apprehensive about the protective qualities of my thin nylon sack. ‘Yes, a fragile sticker thing would be great.’

‘Okay, please sign this for me.’ The woman slid a small rectangular form across the counter at me.

‘It means we are not responsible if we break your bicycle. Please sign at the bottom.’

Whoa. ‘Wait a minute, why wouldn’t you be responsible?’

‘Because you are saying it is fragile.’

I'm no psychology major…wait, yes I am. And I’m sure we covered logic in there somewhere.

‘Well yes, of course. I am telling you it’s fragile so you don’t break it.’

‘You are saying it is fragile because it is not packed properly. So if it breaks you can not hold the airline responsible. That is why we need you to sign that.’

So I tell them it’s fragile so they don’t break it, and my reward is signing a little form that says it is okay if they break it. These airlines must have lawyers working for them or something.

‘Then I take that fragile sticker off,’ said the woman, disregarding the red pterodactyl attacking her throat.

‘So then if my bicycle is damaged I can hold you responsible?’ (I made it a point to say you.)

‘No, the airline (she made it a point to say airline) would not be responsible.’

‘Why not? If you break my bicycle…’

‘Because without a sticker we don't know that it is fragile.’

I ended up signing the form.

On the up side, since I was flying an Asian airline, the beer was free. And since this was not a Chinese airline my bicycle made it through okay. Not perfect, but okay. (Note to anyone traveling by bicycle in Thailand: there’s a big cardboard box and lots of foam in a dumpster behind the restaurant by the side of the road where the bus from the airport drops off people going to Chanthaburi, please help yourself.)

On the other hand, the following conversation took place at the check-in counter of one of the American airlines, all of which have the audacity to charge for beer. This was last Fall while checking my family in for our flight from Tokyo to L.A.

‘Excuse me,’ I said, showing my flight info sheet to a woman with a large blue tuna fish can pinned to her hair, noticeably off-center. ‘There’s no meal for the baby.’ I meant it as a subtle, helpful hint.

It’s obvious when someone is ending a conversation, even in Japanese.

‘Okay, well, we’d like to request a meal for the baby.’ Two meals, really, though I figured I didn’t need to point that out.

‘...He gets a regular meal?’ I knew this couldn’t be the case but neither could the alternative. So I thought.

‘No, there is no baby meal on this flight.’

The woman stared, cock-eyed like a confused puppy so that her tuna can was now sitting on the highest point on her head.

I tried again, without the sarcasm (which was already becoming increasingly difficult). ‘You mean, you have nothing for the baby?’

‘Yes.’ (Which, translated into English, means no.)

‘No food for the entire eleven-hour flight?’

‘You’re kidding me, eleven hours and the kid gets no food.’

‘There is no baby meal.’

‘Not even a piece of bread?’

‘You can give him some of yours.’ (They probably don’t mean to, but Japanese people can come across as terribly magnanimous at the worst times.)

‘But he gets nothing,’ I said.

(At this point I had to switch to English.) ‘Are you flipping serious?’

‘Meals are reserved for people in seats.’

‘You’re sorry? Don’t be sorry, just do something. He’s a real live person. He needs to eat.’

‘There’s nothing I can do.’

‘You can give me back the four hundred dollar fuel surcharge I had to pay for him.’

‘The fuel surcharge applies to all passengers.’

‘And all carry-ons with hair?’

If I ever teach in Japan again I am teaching sarcasm and only sarcasm.

‘Great, so he’s a human being when it means four hundred dollars for you, but when it comes to meals he’s a piece of luggage.’

Blank face. I had to try in Japanese. She still didn’t understand me.

I pointed to my older son. ‘You gave him meals when he was a baby.’

‘United has never given baby meals.’

‘United? What do you mean United? This is Continental!’

To be honest, I had plenty of food in my backpack for the kid. My wife always packs enough sandwiches and rice balls and crackers for the five-hour bus ride to Tokyo, the three hours until we are in the air, the entire pan-Pacific flight and lunch the next day in New Jersey. But my wife’s overzealousness provides an airline with neither reason nor excuse not to offer something in exchange for their four hundred dollar shakedown on my sixteen-pound kid.

‘Let me guess, you don’t offer diapers anymore either, do you?’

‘Why do you keep talking about United? United is United, this is Continental!’

It was my turn to stare cock-eyed. I wanted to ask her if she could make my kid a tuna sandwich.

‘So this is what you are telling me...’ I motioned to the guy at the next check-in window, two hundred fifty pounds easy even without the Louis Vuitton carry-on. ‘My baby pays the same fuel charge as him?’

She glanced over, thought a moment, and turned back to me. ‘Yes. But that man doesn’t get diapers either.’

Okay I made that last part up. But the point remains. For all the advancements in air travel technology – self-check-in, a hundred movies on-demand, special plastic bags for liquids to keep any would-be terrorists from making a bomb – there remains a degree of inconsistency in the application of human intelligence here.

Or maybe the airlines and their lawyers really are smart enough to know just how much they can get away with because we are never going to stop flying.

Until we figure out that wormhole thing.

By the way, Continental and United Airlines are merging, in case you hadn’t heard – or been personally introduced to the circus in progress. This would account for the odd logic the woman with the tuna can was tossing me – though I wish she’d explained why my kid was now legally both a human being and a piece of luggage.

I swore after this encounter with United-Continental’s cherry-picking, profit-driven policy decisions I’d never fly either airline again. Of course I said the same thing about all Chinese airlines not too long ago, for their baggage-handling non-policies. But the reality is that my air travel decisions are savings-driven. Until the day I can afford to fly business class on whatever airline tickles my fancy I’ll have to live with the prevailing air travel culture while I continue staring out the window, marveling at how fast we are going, how beautiful the world looks from six miles up, and how many movies I have at my fingertips.

And hey, the coffee’s free.

Note to the alert reader: Yes I know that while I mentioned at the beginning of this post that last week my senses were reintroduced to the capsicum-like effects of air travel, neither of the above instances occurred last week. This is because I have to go feed and change my carry-on and thus have no time to delve into this latest episode, involving both the bold statements slathered across the pages of the in-flight magazine and the finer print lurking quietly below. This will be covered in an upcoming post – probably the next one as I am not planning to fly for another two weeks, almost.
Posted by Kevin Kato at 5:13 AM